This smoke detector will transmit an alarm to the HP4 Blue Phone and HD4 Dialler, which will then send an alarm call to alarm recipients.

For more information relating this product please contact the Smart Caller Sales team on 03 9588 0833 or at sales@smartcaller.com.au

Being 240V,  this smoke detector requires a qualified electrician to install.

A smoke detector is a device that detects smoke, usually as a fire indicator. 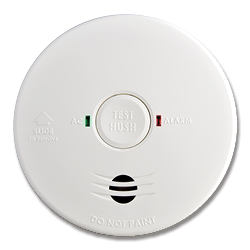